What I didn’t mention is that Saturday the farm hosting the HT also held a derby. In order to get out on the XC course and jump some things, we did the starter (2’3″) and BN derbies the day before. This ended up being a great idea because by the time XC rolled around on Sunday, I was totally feeling game and ready to go vs being a hot mess of nerves.

The course was set up so you had quite a few places to gallop and settle in, which I really liked. I was a little nervous that Doc was going to tune me out and do his best racehorse impression, but after two good derby runs the day before and a good stadium course where he was super tuned in, I started to think maybe we’d be able to really go for it and have some fun gallops.

Oh, and the person who started singing Baby Shark in warmup. Thanks for that one.

We left the startbox (to the tune of do-do-do-do-do-do) and had a short little cruise into the next field for our first jump, a red stairstep we jumped a few times at camp this summer I felt good about. 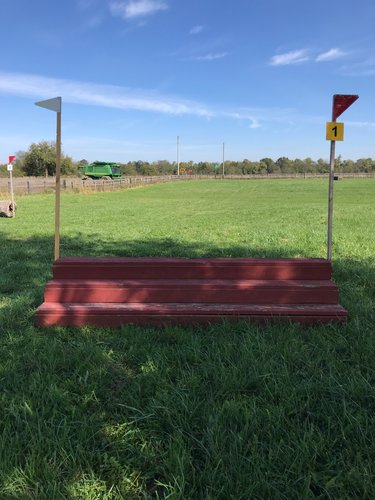 He was a little behind my leg until he locked onto the jump and went, “OOHHH doing jumpies, OK” and then it was like, game on.

Two, you came around through the field to the fence line to a red coop, set really nicely to just gallop out of stride and he did just that. I did make sure to have my inside leg on so someone didn’t opt to take the lazy way out, but he just cruised on over. 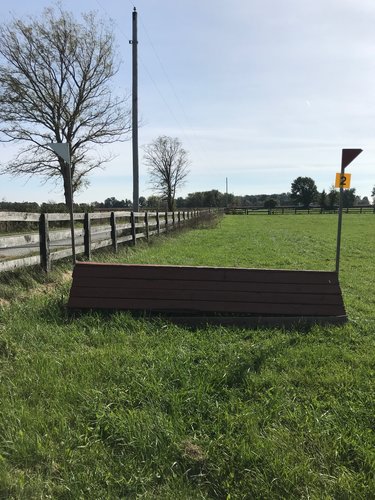 Around the end of the field and back out to three which was on the slightest bit of an angle, but still just a fun galloping pheasant feeder.

Coming into 4 was the first time I really let him out and was going to find out if he’d come back easily or if this was going to be a fight – it was going back towards home and you came right next to warmup and where everyone was hanging out.

Needn’t have worried – half-halt, shoulders back, about five strides out, and he just came up perfectly – the way Trainer K described our feel for the course was ‘bounce the ball’ – like the horse was a basketball underneath you with power. It was as we came over this jump and past everyone in the warmup area (to cheers because Indiana eventing is chock full of the Greatest People) I settled in and went, “OMG we are doing the thing and it’s fun.” It is also where everyone on course heard me talking hilariously enough, because when I talk, I breathe. So I talk through my entire course. To Doc, to myself, to the jumps, to the world.. I’m chatty Cathy up there. Add in galloping and breathing and I’m also… loud.

Through the gate to the next field and over the lincoln logs at 5 (which we’d jumped the day before) and then a sharpish right hand turn to the ditch at 6. 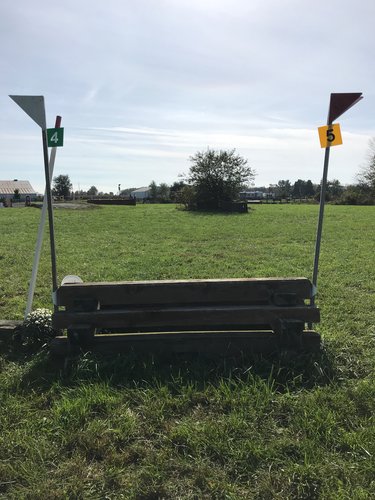 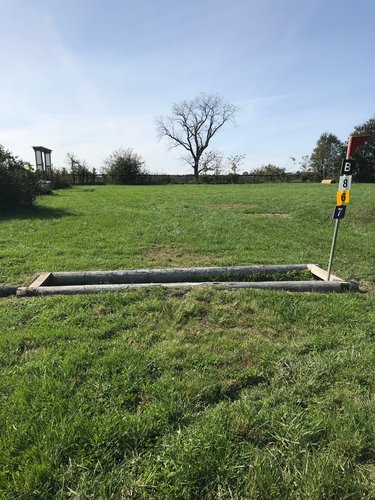 Per usual, Best Horse Ever didn’t bat an eye at anything and gave the ditch the most half-hearted jump effort ever. I have felt bigger strides out of this horse over ground poles. At this point, I’m audibly laughing because this is holyOMGfun.

We came around the corner, downhill and then back up to jump the trojan horse at the top of the hill. Fun fact: this jump was set on a different hill at camp and it is the jump I got run away with to… about 6 times in front of Leslie Law. So when I walked it, my mind was like, “UGHHHH Y” Literally everyone else doesn’t like 8, I’ll jump 8 anyday. I hate this stupid jump. It looks big and dark to me and I don’t like it. 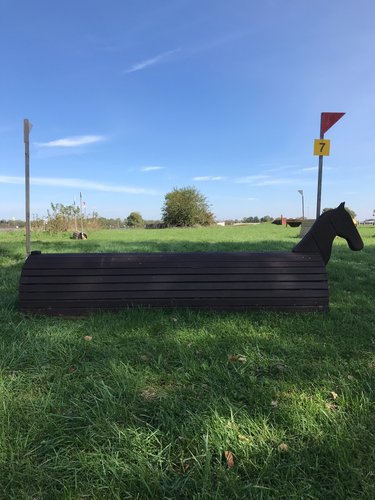 Well, guess I should say didn’t like it, because I just half halted at the bottom of the hill, remembered to keep my damn shoulders back and rode a little deeper like K suggested and it came up basically perfect. Jokes on me.

Around to the left to 8 which is a table nobody else likes, but I think is a badass fun fence (as badass as anything at BN can be…) that was set on a slight downhill. 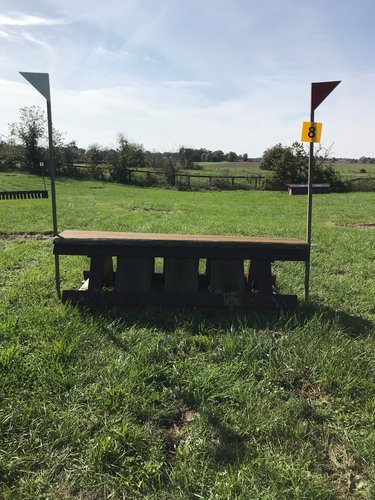 It’s amazing how when you listen to smart people and remember how to ride, things work. From 8 we cruised downhill to the bank at 9 – half of the sunken road we jumped through this summer at camp. Doc had a split second he thought that jumping up this thing was dumb when he could just go to the right and around it, but some leg and a little tap nixed that idea.

If there was going to be a fence anyone had problems with on course, it was going to be at 10. You had to come through a gate at the end of the field and make an L to the tires at 10. Well, no worries here. It’s at this point I’m realizing we’re on the second half of the course and it’s going better than I could have ever imagined. 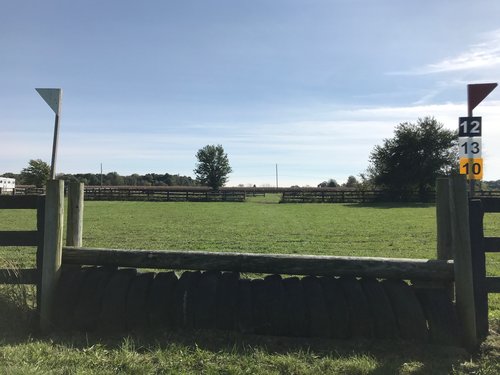 Through those two gates ahead, to a small ditch at 11 to a rollback left to the distillery, which is also one we jumped at camp. 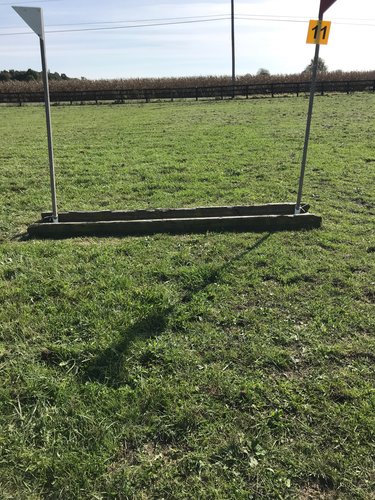 From 12, we came back through that gate to the adjustable bench which when I walked looked stupid big. Luckily since it was set as 13 and we’d had 12 basically perfect jumps up to it, I just went, “Welp, here we go bud,” and quietly jumped it out of stride. 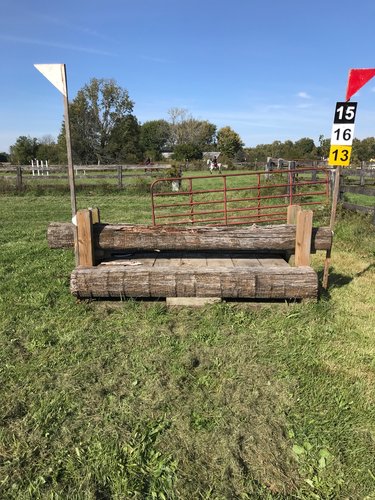 Hah. More like I yelled myself over that damn thing. Literally was like a damn high school cheerleader psyching up an entire football team. He jumped big over it, but instead of going, “Oh shit,” and being unseated, it was this moment of, “Oh my GOD that was fun, I want to do that AGAIN!” Like.. there was air time. And I landed off it and galloped on and was like YEAH REAL EVENTERS.

Reserved and quiet, I am not.

Between 13 and 14 we cut through the arena to to the end of the course. 14 was this new jump – a big cut out table that had freaked me out the day before, but Doc didn’t blink at. On Saturday, I pulled to it, he added and we chipped which is a super fun feeling to a big ass table. Knowing that, I consciously added leg and Did. Not. Pull.

And of course, Perfect Horse jumped it Perfectly.

From the table around the back of the water to the left and a few strides to the last jump on course, a blue table we jumped at camp and the day before.

I came through the water on the line to the last table and couldn’t wipe the smile off my face. I remember just sitting up and telling Doc, “let’s go buddy!” and we just galloped for that jump.

I was giggling like a little kid as we came over that last jump and through the finish. Cheering like I’d just finished a freaking 4 star. I was almost in tears I was so happy, as embarrassing as that is to admit.

We ended up being double clear XC (I didn’t wear a watch so I had no idea what our time was like – turns out we were spot on at 5:21 with OT being 5:41 and speed faults being 4:51. It was enough to move us to finish in 11th despite our other, uh… mishaps, but I could care less about that ribbon.

I don’t have words to describe the feeling of finishing that course. It was the most fun I think I’ve ever, EVER had on a horse. I’m pretty sure running XC is a drug because I’m addicted.

Only… five months? until next show season.

How to go to a horse show

Eventing with the motto: champagne taste, tap water budget.
Come for the chestnuts and Jack Russells, stay for the questionable distances and retail therapy.

took advantage of a little light and a dry ring an

we have some FEELINGS about our @performance_vet_p

merry christmas from archie and me! he’s happy t

where it all started: reunited with my best girl l

great last lesson of 2020 this weekend with some f

as beyoncé said “if you wanna see some real ass

so proud of this smart boi for stepping up this we

new custom bat from @tackshackocala in our colors

we had our first jump lesson since the end of octo